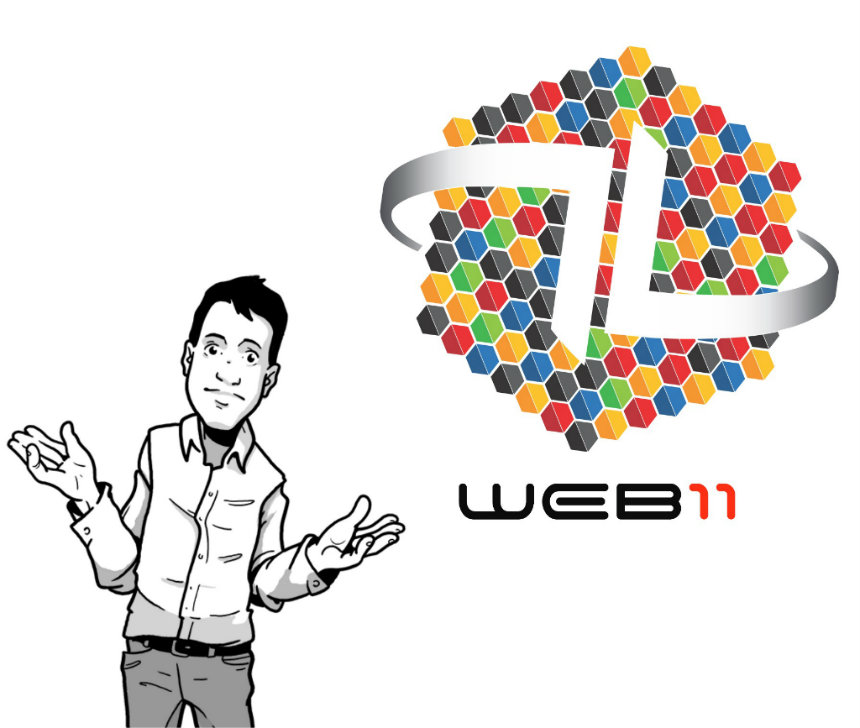 As Simon Sinek suggests great initiatives start with ‘why?’. Although told in many ways, the reason why the Web11 movement was started hasn’t been written down. So here goes.

The world wide web is an application built on top of the internet. Although the internet existed as a network of computer networks since the late 1960’s, it took about 25 years before the ultimate use case was found that would lead to mass adoption. It was the use case of humans easily accessing documents and other web resources identified by URLs, interlinked by hypertext links (via the internet). I’m telling this because of the similarities between the way the web relates to the internet, and the way smart ecosystems relate to Web11.

It was the ‘other web resources’ part in the description of the web that peaked my interest in those early days. I was studying Mass Communication science at that time and recognised that the internet in general, but the web specifically, could best be understood by studying it as a medium. In the sense of newspapers and radio being media. Because looking beyond the facade of the most popular applications of the web it was clear that fundamentally the internet (and the web) were about exchanging information. What was new about the web was the peer-to-peer nature. Since information is valuable the peer-to-peer exchange of information seemed to introduce a much richer market aspect to media. The internet made it possible for every participant to both offer and consume value in the context of a wider network. That got me thinking, because what if the ‘other web resources’ were provided by other autonomous participants than humans? For example, every object has value it can offer to the rest of the network. Something as simple as a curbstone can tell where it was manufactured, what the average temperature has been over the past year, which street it’s part of, etc. But it can also provide value in the form of doing something for others. For instance provide internet connectivity or tremble. It occurred to me that the vast majority of the world’s information and functionality was locked up inside objects. Making these object part of a digital network would unlock that unfathomable amount of value. Doing so in the right way could really make the world a much better place. Not in the last place because it also includes unlocking the full potential of humans by making them part of a network in which they can easily offer or consume value.

Thinking a bit longer about this made me realize that making every object part of a bigger digital network would happen sooner or later. Technological advances were happening so rapidly that such a future would be inevitable. This thought was not completely new, other visionaries had been pondering the same and around the same time as my thought experiment, in 1991, David Gelernter published his book Mirror Worlds: or the Day Software Puts the Universe in a Shoebox…How It Will Happen and What It Will Mean. In it Gelernter described the same vision and gave some clues about how such a network could be built. Although an inspiring book, each possible answer raised a multitude of related questions. Put shortly, unlocking the world’s potential should be done wisely, else it would be like opening Pandora’s box. Remember, 1991 wasn’t that long after 1984. Before building such a powerful system you have to think about things like privacy, scalability, power centralization, security, data ownership, resilience, usability, etc. These things can’t be bolted on afterwards, forgetting to do so would result in quite a dystopian future.

Although unlocking the world’s potential became something I wanted to dedicate my resources to, I didn’t have the answers to all the questions raised. Besides, the situation was still highly hypothetical. They were not practical problems in the early nineties. The web existed mainly out of web servers and only a few experimental devices had internet connections by that time. Mainly due to technology not being ready. There was no wireless networking, batteries lasted for 1 minute, CPU’s were dogslow, very expensive and big, etc.

Fast forwarding to the future I’ll skip what happened in the meantime. I personally worked in different settings on related topics, but most importantly I met Henk Doornbos, with whom I further developed the intellectual foundation of the Web11 movement. Our brain-tennis over topics related to Web11 has by far been the most important driver of what came to be Web11. So our ideas evolved, but so did the world. Over the past 25 years things have changed considerably. The internet has penetrated almost every aspect of our daily digital and physical life. And it won’t be long before every product that can have a CPU and network connection will have so. By now there is no doubt that we are creating this fine-grained digital network of interconnected objects. But we forgot to answer the questions stemming from the early nineties. We haven’t done so very wisely. The result is a network where every object is hackable, where privacy is a commodity and at stake, where data ownership is unclear, where almost all power is in the hands of a few very large commercial organizations, … There is a lot at stake and even the general public starts to realize that things need to change.

By 2014 it was clear that the hypothetical questions from the early nineties had become practical problems. Sticking to the dream of unlocking the world’s potential I realized the time had come to take my responsibility. Together Henk Doornbos and I launched the Web11 foundation to canalize all our efforts in building a better web and offer a platform for others to join.

After explaining our vision to a wide range of listeners for two years we realized many had problems with the scope of it. It was too general and big for them to translate to their own lives. We figured it was a bit like explaining the internet to potential users before the web was invented. That is when it dawned on us that Web11 was an effort to support the ecosystem of all objects on earth. Scoping it down meant making smaller ecosystems smart. Supporting a subset of objects to exchange value, to act as some sort of local economy. If these objects could offer or consume value safely and autonomously it would improve the ecosystem as a whole. By looking around we soon realized that instead of focussing on the earth’s complete ecosystem there were many smaller ecosystems residing in a sub-optimal state. Whether they were artificial or natural ecosystems. By applying the right methods and technologies from the Web11 foundation many of those ecosystems could be improved drastically. Resulting in a net gain for the entire ecosystem. And since ecosystems are made of ecosystems, higher order ecosystems would profit as well. So although the mission hasn’t changed, narrowing the initial scope meant our message became that we wanted to make ecosystems smart. A message most people can easily relate to.

Being software professionals Henk and I could provide innovation in software ourselves, but we realized the problem wasn’t purely technical. It includes for instance legislative, business, societal, ethical, economic and human aspects. An holistic approach was needed for a comprehensive solution. That is why the Web11 foundation is a platform where experts from all kinds of disciplines meet. At first sight this might seem as a lack of focus, but there has been a similar and successful movement in the architectural world early last century — Bauhaus. The founding fathers of the Bauhaus movement realized it took expertise from art, science, technology, business, etc. to create the best possible buildings. This proved to be absolutely right and for the past century Bauhaus has been the leading architectural mantra. Similarly the Web11 foundation realized it takes a holistic approach to make ecosystems smart. You could say that similar to how the Bauhaus movement leads to better buildings, the Web11 movement leads to smarter ecosystems. And that’s what we want, because ecosystems where all participants can safely, securely, autonomously, responsibly, etc., exchange value will make the world a better place. For sure.

That’s why… And we are sure there are more of you out there that understand the importance of this mission. Don’t hesitate and join us at web11.org!